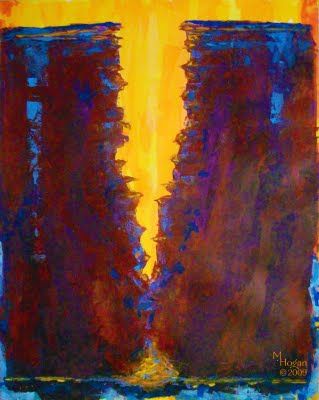 Among the many remarkable events surrounding the death of Christ is the temple curtain being torn in two. The interpretation of this divine act has as many strands as the curtain itself. It has been said that the tear signifies: (1) God’s judgment against unbelieving Israel, who did not recognize their day of visitation; (2) God’s termination of temple worship, as Jesus’ death and resurrection fulfills all to which the temple pointed; (3) God’s termination of the old covenant upon the finished work of Christ; (4) God’s accessibility to all people through the priestly ministry of Jesus; (5) God’s mission to fill the whole earth with his glory. None of these explanations is mutually exclusive. I believe there is truth in all five.

I would like to suggest another interpretation—not in place of the more traditional interpretations, but in addition to them. One more interpretation can’t hurt, right? Here’s my suggestion:

The torn curtain signifies God’s sorrow over the death of his Son. The tearing of the curtain is the Father rending his garment in grief.

Take three steps with me, step one being to understand the darkness that covered the land at noon on the day Jesus was crucified. The darkness seems to bear some relation to the torn curtain, as Luke pairs the two:

It was now about the sixth hour, and there was darkness over the whole land until the ninth hour, while the sun’s light failed. And the curtain of the temple was torn in two. (Luke 23:44-45)

What is the connection between these two phenomena? The connection, if indeed there is one, can be made along the lines of the darkness. In what appears to be a clear foreshadowing of Christ’s death, the prophet Amos associates the darkness with mourning:

“And on that day,” declares the Lord God, “I will make the sun go down at noon and darken the earth in broad daylight. I will turn your feasts into mourning and all your songs into lamentation; I will bring sackcloth on every waist and baldness on every head; I will make it like the mourning for an only son and the end of it like a bitter day.” (Amos 8:9-10)

The meaning of the darkness is mourning. The death of “an only son” is the cause for turning out the lights, for putting on sackcloth, for shaving one’s head. It is a day of bitter lament. The prophetic imagery here, in its fulfillment, is of God grieving over his only Son as he dies on the cross.

Small step two: if the darkness is a sign of mourning, it’s no big stretch to understand the tearing of the curtain as a rending of one’s garment. It was customary among the Hebrews to tear one’s robe in a time of grief. We’re told, for example, that King Hezekiah “tore his clothes and covered himself with sackcloth and went into the house of the Lord” (Isa. 37:1). In the Greek Old Testament, the word used for “tear” in reference to Hezekiah’s clothing is the same word Luke uses for “tear” in reference to the temple curtain.

The context of mourning, therefore, offers a ready explanation for Luke’s pairing of the darkness and the torn curtain. The temple curtain functioned as God’s garment, so to speak, hiding his presence from the people. In sorrow over the death of his only Son, the Father sends darkness over the land and tears his garment in grief.

Step three: Jesus explicitly relates to God as his Father, which further strengthens the idea that God, as Father, was grieving over the crucifixion of Jesus as for “an only son” (cf. Amos 8:9-10). Immediately after reporting the darkness and the torn curtain, Luke writes that Jesus called out with a loud voice, “Father, into your hands I commit my spirit!” (Luke 23:46). Jesus dies not only as the Prophet, the Priest, and the King—he dies as the Son, entrusting his spirit to the Father.

One objection to this interpretation of the torn curtain is that it is somewhat speculative, hanging mainly on the prophetic background of Amos 8:9-10. I concede to speculating. However, it must be acknowledged that no other interpretation of the torn curtain is free from speculation. Luke doesn’t spell out the meaning. Since we must speculate, what is wrong with doing so within the context of Amos’s prophecy? Indeed, if Amos’s prophecy finds fulfillment in the events surrounding Jesus’ crucifixion, then our understanding of the cross will be impoverished if we fail to consider it.

Another objection is that the Father was doing anything but grieve as Jesus died. For example, we are told that it was the will of God to crush Jesus (Isa. 53:10); that Jesus was cursed in crucifixion (Gal. 3:13); that Jesus was forsaken by God (Matt. 27:46). But surely it is not difficult to imagine that God is capable of feeling multiple emotions at once. Even earthly fathers know what it means to willingly discipline their sons while at the same time grieving over the pain caused by the discipline. There is no necessary contradiction between God’s willing that his Son die and God’s grieving over his death.*

So what if this interpretation is true? Then the darkness and the torn curtain give us a moving glimpse into the Father’s love for his Son. God is not dispassionate, aloof, unfeeling. No! The Father grieves to see his beloved Son suffer. Jesus has been betrayed, mocked, spit upon, scourged, and nailed to a tree. The Father’s response to such torture isn’t to cross his arms in detached resignation. Sovereignty isn’t stoicism. Rather, God blocks out the sun and tears his holy garment. Both the cosmos and its holy place reflect the sorrow of the heavenly Father.

Not only does this interpretation deepen our wonder in God, it grounds our comfort in God. Few things should be more comforting to the Christian than the Father’s love for the Son. For the way the Father loves the Son is the way the Father loves all who are in the Son. God is no less concerned about our suffering than he was for Christ’s. God keeps count of our tossings and tears (Ps. 56:8); he cares for us in the midst of anxiety (1 Pet. 5:7); he draws close to us in our pain (Ps. 34:18; John 16:32); he strengthens us in our trials (2 Tim. 4:17). We would have little affection for a taciturn god, but the Father of Jesus loves us in a way that draws forth our adoration: “Blessed be the God and Father of our Lord Jesus Christ, the Father of mercies and God of all comfort, who comforts us in all our affliction” (2 Cor. 1:3-4a).

The psalmist once promised that “those who sow in tears shall reap with shouts of joy” (126:5). The day of shouting is coming. But until that day, we take comfort in another day—the day God turned off the light and tore his clothes in grief. What love the Father has for his Son … and for those who are in his Son!